In my previous blog about App Volumes, I mentioned how versatile App Volumes is. Again, the amount of use cases is endless.

In End User Computing terms, we have a couple of use case categories that most users can be included in. The 2 mostly used ones are:

Task Workers – Users that have the standard set of applications and run a stateless (also called non-persisent) desktop.

Knowledge Workers and Power Users – Users that have a set of applications that use more resources like 3D, big documents, databases, etc. In some cases, these users need to install their own applications as well. Because of this, a statefull (also called persistent desktop) is mostly used.

Imagine you manage a VDI with 1000 named users. 700 of these users are concurrent. When designing the VDI, you want to keep the lifecycle of every desktop as short as possible to reduce needed resources on the vSphere infrastructure and the management of the VDI. Let’s say that the concurrent users work during normal office hours (8:00 – 18:00).
When a user logs in on the VDI, an available desktop is assigned to the user, his profile is loaded from the network and virtual applications are streamed towards the desktop. In approximately (and depending of the number of applications) 30 seconds the user is able to work. Of course, this is the most ideal situation where the complete set of applications are virtualized.

An important part of designing a VDI is creating a smooth and seamless user experience. So to provide the user with an available desktop in the shortest time possible, you would like to provision the desktop before the user starts working. Or better yet, before the 700 users start working. The time needed to provision a virtual desktop depends on the underlying infrastructure. At one of our customers, PernixData FVP is used to cache the golden images on SSD’s. When provisioning a single virtual desktop, the total time needed is approximately 3 minutes (including customization). Different FVP-enabled hosts are used, but when provisioning all the available desktops, it will take all night.

When a user logs in, loading the profile and streaming the applications take most of the time before the desktop is ready.

Is all this acceptable? Of course, the answer to that question is: it totally depends on the use case.

So let’s talk about what Project Fargo is and what this technology (together with App Volumes) could do for our VDI.

Basically, Project Fargo (also called Project VMFork) is a technology that generates a new linked clone out of a running parent desktop (forking): 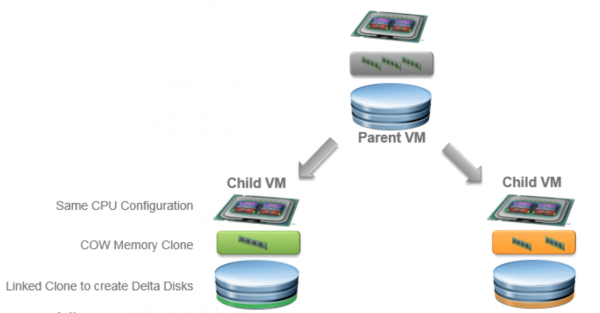 The newly created and customized linked clone will use the memory and disk of the parent VM until something changes within the linked clone. The changes (depending of memory or disk) will be placed in a delta memory page or disk. When the users logs off, the profile is synchronized and the VM is cleaned up. The in-memory-fork-linked-clone is also called a Just-in-Time (JIT) desktop.

The greatest thing about this is that the creation of the linked clone will only take a couple of seconds instead of minutes.

This will mean that a virtual desktop could be created upon request instead of pre creating it. It will reduce the lifecycle of a linked clone dramatically. And the whole pre-provisioning proces at night will be history.

When using Project Fargo together with App Volumes, provisioning a desktop with applications is done in an instant. If the user’s profile is provided by Persona Management, logging on to a desktop is an on-demand process without any delays. Persona Management has the ability to load the profile after the user has logged on. Before the profile is fully loaded, the user is already presented with a desktop.

So like an illusionist, when snapping your fingers once, a desktop appears out of nothing. Snapping twice, applications are provisioned. And at the third snap, all user settings are loaded. I feel like Hans Klok already..

Quite astonishing, don’t you think? The EUC technology is going through an evolution and the end isn’t near yet. I’m quite curious what the next phase in EUC-evolution will be.

Be sure to keep following us as we are busy with these exciting new EUC techniques like App Volumes.