AppVolumes: The next best thing after sliced bread

In this article I wrote a couple of months ago, one of VMware’s current goals is to become global market leader in Virtual Desktop Infrastructures (VDI). The Horizon Suite has evolved from just a virtual desktop to a complete End User Computing Experience with support for both the VDI as well as the local desktop. Numbers from 2013 show that VMware has a marketshare of approximately 40%, the same as Citrix.

So to become primary market leader in EUC, VMware needed to do something. Come up with a new unique selling point to create that bigger market share.

In august 2014, VMware acquired CloudVolumes. In my honest opinion, one of the best moves ever.

CloudVolumes is the name of the company ánd the solution they built aimed on rapid deployments of apps, changes, user data, etc. And how it works (better yet, how fast it works), is absolutely astonishing. To make it a more VMware branded product, it has been rebranded to AppVolumes.

1.You have a clean desktop

2.Start a recording for a new Application Volume

The Application Volume is stored in a vmdk, which can be attached to a VM by the AppVolumes agent.

In the above case of users needing applications on a Virtual Desktop, a read-only volume is ideal. Whenever a user needs to save application or user settings, they can be stored in the profile with Persona Management or on a persistent disk.

Another option is to save these settings to a separate Writable Volume. It detaches when a user logs off and attaches again to a new desktop when the user logs on. Really cool, if you ask me.

But what makes it really awesome, is the ability to create Writable Application Volumes.

Let’s say you have developers who need to install their own applications. That’s going to be challenging on a linked clone. And you want to avoid full clones as much as you can. Also, you want your pools to be floating as much as possible. So how would AppVolumes fit in?

The project I was telling about has about 300 users that have a dedicated VM that has their applications installed. Basically like a second workstation used for development/test/acceptance. IT had big challenges to migrate these VM’s to  managed-floating-linked clones. I’m guessing the challenges are over..

Another use case could be the deployment of serverside applications like Apache, MySQL, PHP and frameworks like WordPress or Joomla. The server could be a standard deployed VM, customized by a Customization Specification. And the needed applications are just as easily deployed by AppVolumes. Without any configuration.

On VMworld 2014 in Barcelona I have seen the current version (CloudVolumes branded) in action and I’m still impressed. So to answer the question on how VMware is going to be primary market leader in EUC, here’s the answer: AppVolumes. The amount of use cases is vast. The expectation is that AppVolumes will be ready to ship somewhere in Q4. So let’s hope Christmas will be early this year. 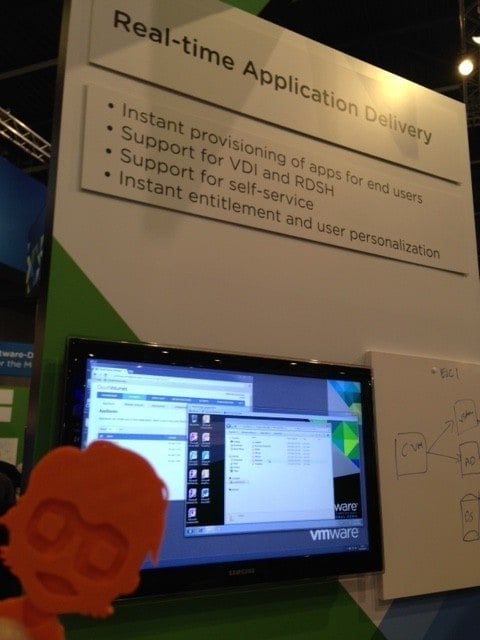