A few weeks ago Veeam released a new version of it’s Backup & Replication Suite. Veeam® Availability Suite™v9.
For everybody who lived under the “Backup Rock” the past few years: 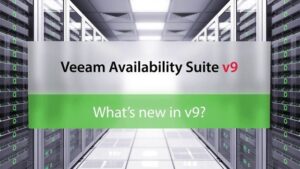 Veeam® Availability Suite™ v9 has a lot of enhancements and new features, but improvements around primary and backup storage will surely be one of the biggest changes of this new release.

A few of the new additions above I will describe below.

Managing backup storage can be a tricky business. This is largely due to the fact that the exponential rate of data growth is outpacing the ability to manage it in efficient ways. Physical storage units simply hit the maximum configurations, are unable to be expanded at all or backup storage is just barking on the lower end of the tree because of the costs.

Scale out Backup Repository provides an abstraction layer over individual storage devices to create a single virtual pool of backup storage to which to assign backups.

With this you can extend the repositories when they will run out of space instead of facing long and complicated relocations of backup chains (which can become huge in large customers), users will be able to add a new extent (that is a “simple” backup repository) to the existing scale-out repository. All existing backup files will be preserved, and by adding an additional repository to the group, the final result will be the same target for backups getting additional free space, immediately available to be consumed. This get’s a software defined touch by Veeam. To me this is the “software defined backup repository”.

A webinar about the Scale out Repositories is available here and a simple explanation of this on the Veeam Youtube channel.

NFS users have felt a bit like second-class citizens in the virtualized world and the lack of direct access to NFS storage to read data during backup operations was surely one reason to “envy” block storage users. Now, in v9, something similar to Direct SAN processing mode has been made available for NFS as well. This new feature is called Direct NFS. With it, any new Veeam proxy will run a new and improved NFS client to directly access any NFS share exposed to VMware vSphere, supporting both the traditional NFS v3 and the new NFS 4.1 available in vSphere 6. With the complete visibility of single files allowed by the NFS share, NFS users will be able to backup and replicate VM’s directly from the NAS array and avoid the need to cross the hypervisor layer for their activities. This will result in faster backups and an even smaller load on production workloads. So say goodbye to the forced “NBD” mode for NFS. Be aware that when you upgrade from Veeam v8 you will need to deploy new proxies to be able to use Direct NFS.

Veeam’s standalone console provides every user convenience, flexibility and ease-of-use by separating the Veeam Backup & Replication console from the backup server. This new installation can be done on laptops and desktops, forever eliminating RDP sessions to a backup server.

This also makes it possible to manage multiple separate Veaam backup servers from the comfort of your own system. Also Multi-user support has been added. Backup administrators will now be warned of conflicting edits when attempting to save changes after editing the same job concurrently.

The Exterprise manager also has been given a useful update. Single sign-on got the ability to use native Windows Authentication in Active Directory environments. So no more senseless logging on when you’re already logged on into the domain.

RESTful API intergration is now available in all product editions when a per-VM license is installed. This is a very welcome addition for like Service Providers to automate a lot of Veeam functionalities within there own customer portals.

To wrap this blog up, Veeam has done a pretty good job with v9. Also listening to the community for feedback and adding those much wanted features. Gotten curious on all the other new features and what they bring? Hop over to the Veeam website and catch up your reading quota’s.