The Open Compute Project – Efficient Computing for Everyone

Last week the Open Compute Summit was held. You can watch the recorded keynote sessions here. After watching the videos I realized that this project might not be as well known in europe as I think it is. So here is an introduction to the Open Compute Project.

The open Compute project originates at facebook and began by searching for an answer to this question:

“how to scale our computing infrastructure in the most efficient and economical way possible.”

As facebook needed more and more computing power and storage to service all user requests they realized that just the costs of electricity and servicing the hardware would be prohibitively large to keep the business running. The big server vendors did not offer an innovative solution to their problem so they began to engineer their own hardware. Of course facebook was not the first one to do this. Google has been long known for designing and producing their own server hardware. Also Microsoft came up with their own blade design to keep the costs of their datacenters as low as possible. So how is facebook different? Well, they were the first to open source their designs! So now everybody can learn from them and even produce their own servers based on facebooks designs.

But it doesn’t stop there. Facebook started The Open Compute Project to encourage others to take their designs and improve it and give the new designs back to the community. So now hardware can be designed in very much the same way open source software is build.

Since the start of the Open Compute foundation the range of designs was expanded from just racks and servers to storage hardware, battery packs and recently networking hardware. 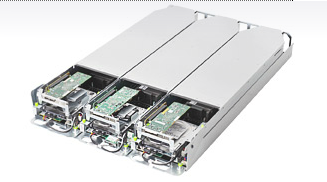 As I stated before facebook went on a mission to find a more efficient way to scale their copmuting infrastructure. So how much more efficient is this open compute hardware? Facebook build a datacenter in Prineville which is completely based on open compute standards. This includes racks, servers, storage, electricity system and even the building itself. They Claim this facility uses 38% less energy and costs 24% less then their traditional facilities.

Then there are the disk bays most industry standard servers have and nobody uses, a lot of USB ports nobody uses, inefficient and noisy fans and a lot of sheet metal encasing all servers. When you get rid of these, what’s left is a machine that exactly does what you need and nothing more. Which in turn means that all the stuff you don’t need doesn’t eat up your electricity or occupy expensive real estate.

Efficiency in power consumption and space is not the only thing that improved with the OCP designs. Ever wondered why you cannot service a server from just one side? I did and I could never come up with a logical explanation other then that it has been like that for ages so that’s the way we keep doing it. But if you have to maintain 100.000 or more servers or this walking around the rack is going to cost you a serious amount of time. So Facebook designed their servers in a way that they can be services completely from the cold aisle.

The efficiency that is gained by designing your own hardware is the reason why big web services still exist. If it were for HP, Dell or IBM (now Lenovo) services like Amazon AWS, Google and facebook would never have existed. Because their hardware is too expensive and way to inefficient to build a profitable web business on.

So that’s cool for the big guys out there but can I as an enterprise or SMB user profit from this? I think you can. In fact I think that OCP is just getting started and will in a few years time represent the larger part of the x86 server business. Just like how Linux took over the world, but faster. There is one difference though: The hardware designs are free but the hardware still needs to be manufactured by someone. I think there is a big opportunity for the existing server vendors to produce OCP hardware. The question is if they are interested in this. Nobody wants to pay for an HP logo if they can get exactly the same hardware from some random Taiwanese company. So I suspect there will also be a lot of other manufacturers jumping in to build these innovative new solutions. Whether the big vendors participate or not, I think OCP will be a huge success and it will drive down server prices dramatically. I suspect IBM saw this coming and got rid of their x86 server business just in time.