Disclaimer: This post contained NDA information which was not allowed to be published and has been removed.

Today VMware has made a change many of us have been asking for, and one which is warmly welcomed: A tiered licensing model for NSX has been announced. One of the biggest issues with NSX for both customers and consultants alike was its pricing: Even if you just wanted to use basic features of NSX such as VXLANs, distributed routing or the edge service gateway functionality you’d have to pay for the full product. Effective from today, three license tiers are available: Standard, Advanced and Enterprise. 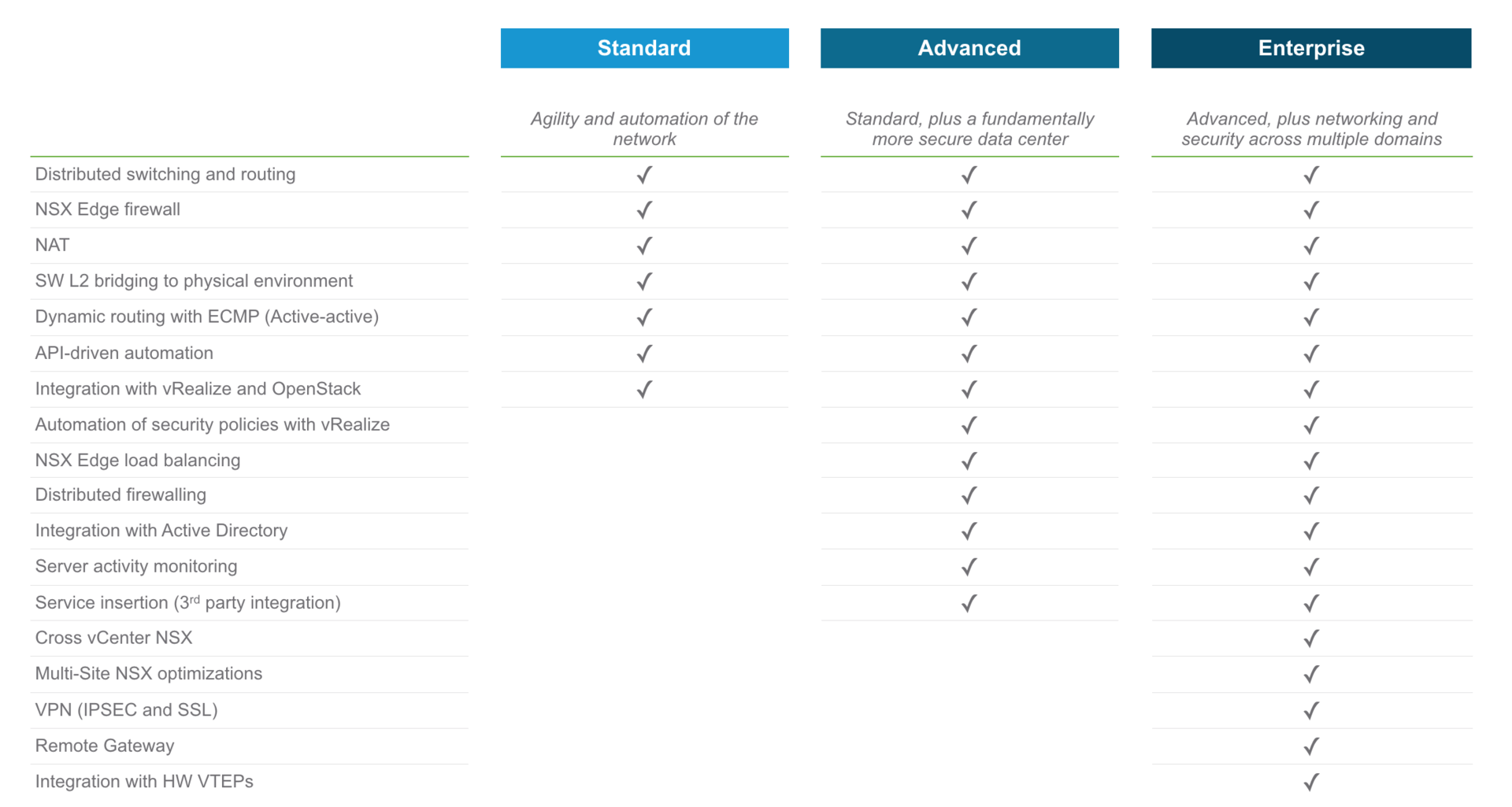 As can be seen above, multiple options exist for multiple use cases: Enterprise is the full-featured NSX product, Advanced is aimed at most enterprise who do not require features such as Cross-VC NSX or hardware VTEP integration. Standard is suited for small businesses or enterprise customers that specifically use NSX for distributed switching and routing and are not interested in using distributed firewalling, third party integration load balancing or vRealize automation based policydriven security.

In addition to the tiered licensing model, some other changes have been announced.

NSX for horizon has been rebranded to NSX Advanced for desktop. This means that if you buy the per-user license of NSX for horizon view you will always get the advanced license of NSX, which should be sufficient for most horizon use cases that require NSX. The only thing that would be a nice improvement is to include the Cross-vCenter NSX feature in the NSX advanced for desktop license, considering how much effort VMware is putting in the horizon view Pod design.

The enterprise license is now also available on a per-VM (non-perpetual) license model in addition to a per-socket license, which allows you to budget for growth much easier if you are a company that has a significant delta in the amount of virtual machines. Which license is the best for you is entirely dependant on your requirements, virtual environment and features that you wish to implement. Ofcourse, you can always change your license to a higher tier if at any point you decide to implement additional features in the future.

One last change which is very welcomed is the license requirement for both management clusters and DR sites. As described by VMware, you are now no longer required to license physical hosts which have not been prepared for NSX if your NSX manager or controller is running on those hosts. In addition, you are now no longer required to license any hosts that do not have any active workloads running on them, allowing you to run a failover site with products such as Site Recovery Manager without having to pay double the NSX licensing fee (assuming that you are running an active-failover DR setup).

NSX licensing changes are effective from the 3rd of may 2016 onwards. For more information, see the official KB at https://kb.vmware.com/kb/2145269.