“NimBrix”, the Nutanix that never was.

On my google search for the story behind the ScaleIO acquisition by EMC, I came across a product called “NimBrix”. This product was officially announced in December 2012 by RedPixie, this is a British technology firm (http://www.redpixie.com). NimBrix was announced as a next generation appliance which combines storage, compute & low latency networking, very much like Nutanix.
The NimBrix NB4UX contained a SuperMicro FatTwin as the core. The solution would also come with an ultra-low latency switch from Gnodal, a 72 port 10Gb/s unit would provide the storage networking. In this it would have differed from Nutanix where the switch to handle the storage IO is not included in the standard offering. The speed of the IO would have been handled by a Fusion IO card installed in each host. And off course it also came with the software to make it all work, you guessed it “ScaleIO” , this would create a virtual SAN of the local storage in the 4 node unit.

When I search the Redpixie website for “NimBrix” there was no result, I guess they stopped the further development of the product when EMC acquired ScaleIO in July 2013.
Below are the Specs of the NimBrix NB4UX taken from the official PDF, which can still be found on the web. 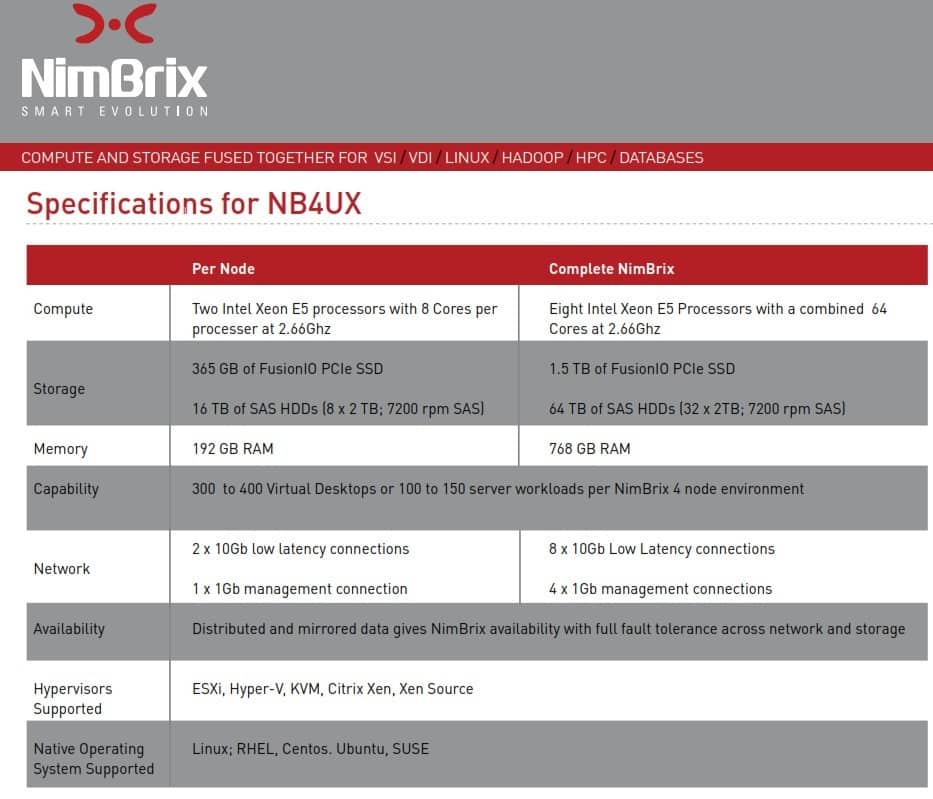 An official statement from the RedPixie CEO came when I asked him what happened to the NimBrix product:

“Thanks for your email. It’s actually not entirely disappeared. We are working with Dell and EMC on this.”

So maybe the Nutanix clone will make it to the market after all, I guess they will not be the only one, more combinations of converged solutions will follow in 2014. I am sure Dell will try to get a piece of the converged cake as well.