So my notebook got replaced a little white ago (I now have a Dell XPS 15) and it comes with a UEFI BIOS.

Wanting to start with a clean slate to set up my development environment I downloaded a Windows 8 ISO from MSDN and installed the Windows 7 USB/DVD Download Tool (can be found here).

The WUDT lets you create a bootable USB stick that you can use to install Windows. So I followed the instructions with the tool and it created the bootable stick for me. So far so good.

The EUFI BIOS however refused to let me boot from the USB stick! After disabling the secure boot option in the BIOS it would work fine, but I want that option to be enabled. The solution turned out to be remarkably simple. The WUDT will create a bootable USB stick but it will format the stick with NTFS! Which (I don’t know why) the UEFI BIOS won’t boot from.

Plug the stick in and select the ‘boot options’ option when the machine is booting. It should now show the stick as a bootable medium and you can now install Windows from it. 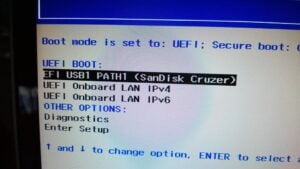 PS: The WUDT has Windows 7 in its name, but don’t worry, it will work with Windows 8 ISO images as well.