Last October marked my 20th anniversary in IT. I’ve worked in a lot of different roles such as junior developer, field engineer, packager, and now as a Technologist at ITQ. In those 20 years, I have learned a lot. Especially on soft skills and technology. But, some things you just don’t learn or take for granted. This story is about such a thing. To prepare yourself for the unexpected and make sure to get the best out of a bad situation.

In November 2019, it was time for one of the highlights of the year: VMworld Europe. I am feeling really grateful for working at an employer who sees the benefit of such a conference and as a result, I was amongst 39 other ITQ colleagues from Belgium and The Netherlands to learn, teach, network, and have a lot of fun while doing it. VMworld 2019 in Barcelona was probably the most memorable one. ITQ had a massive exposure with all sorts of activities (Francisco was on stage during the Partner Day Keynote, we were a sponsor of the BeNeLux party and the project I’m working on with an awesome team of people had a feature in the day 1 keynote with a mention by Pat Gelsinger). For me personally it was special as well. I had 4 different talks on VDI by Day, Compute by Night (one of the parts of the project I just mentioned). So, you see, it was an awesome VMworld indeed. 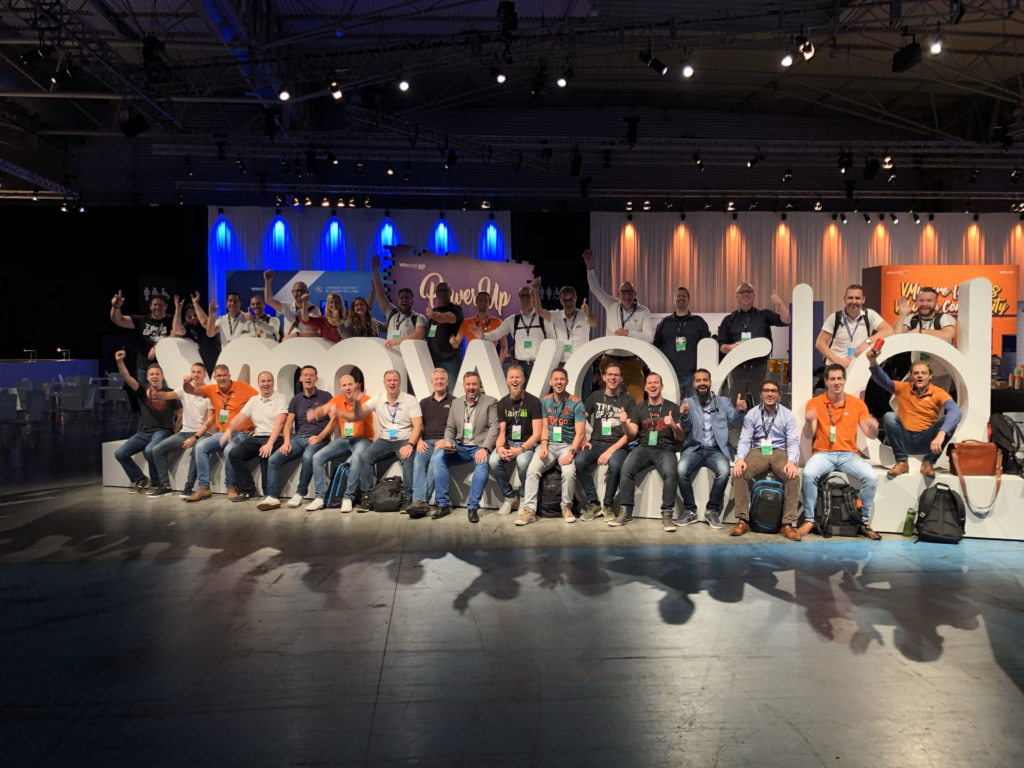 Awesome, but not entirely. Part of VMworld is the customer appreciation party on Wednesday (which I normally attend as it quite often has awesome bands). This year was a bit different because with a couple of friends we decided to skip the party and go for some great Catalan cuisine instead. The restaurant we had in mind doesn’t allow for reservations upfront, so we had to wait until a table was available. We had to wait around an hour or so, but enjoyed a nice drink outside the restaurant and had a chat. Amongst the group was my colleague Maarten Caus, but also Shawn Bass, Benny Tritch, Brian Madden, Mark Plettenberg, and Jim Moyle, so you can imagine we had some nice chats about technology, EUC, and other non-work-related stuff. The thing you need to know is that we came directly from the venue were Brian (Madden) just finished his own EUC, Beer, Tapas and Tech Talks event where I presented. Another thing is that I didn’t visit my apartment first to drop my things. Because my bag contained a lot of things (Macbook, iPad Pro, power banks, charging cables, and a lot of other stuff such as memory cards and external SSDs), the bag was heavy and so I put it on the ground, next to the wall of the restaurant, together with a couple of other bags. We were in half a circle around the bags, so I felt confident that the bag was safe. Just before the table was ready, I had to go to the men’s room. When I got back and wanted to pick up my bag, it was gone. My heart pounded and I felt a shiver down my spine. I looked around for a bit and asked the others if they might have picked up my bag. Unfortunately, no one had and no one had seen what just happened. I always hear people talking about the professional pickpockets in Barcelona and how they got robbed, and I always thought it couldn’t happen to me (because I’m always protective of my things). What supposed to be a great end of the conference, turned into a real shit storm. Not only was my professional gear stolen, but the bag also contained my passport.

Luckily I didn’t panic and quickly went into fix-mode. I called the insurance company, my wife and employer to let them know what happened and went to the local police station to file a report. Robert Hellings (our CEO) came along with me since Spanish appeared to be a second language to him (funny enough he speaks Spanish a lot better than Francisco Perez, one of our founders, who actually is half Spanish).

Next, I needed to ensure the stolen goods weren’t compromised. All of our company equipment is being managed by VMware Workspace ONE. Phones, tablets, laptops, and Macbooks are enrolled and fully managed. I signed into the Workspace ONE UEM portal from my phone and executed a remote wipe of both my iPad as well as my Macbook. As everything is encrypted and secured with multifactor authentication, the data wasn’t at risk.

The next day I went home and since my gear is essential to perform my work, the first thing I did after leaving the plane was to head directly to the local Apple Store. After swiping my credit card I was fully on my way back home to start configuration hell. Because, as many of you may know, installing a new device takes a lot of time. You need to do a basic configuration, download updates, install applications, configure and authenticate those applications, restore data and reboot a lot of times… 🙁

Unless you have VMware Workspace ONE… 🙂

The first thing you do on the new device is to open up your browser and go to https://www.getwsone.com 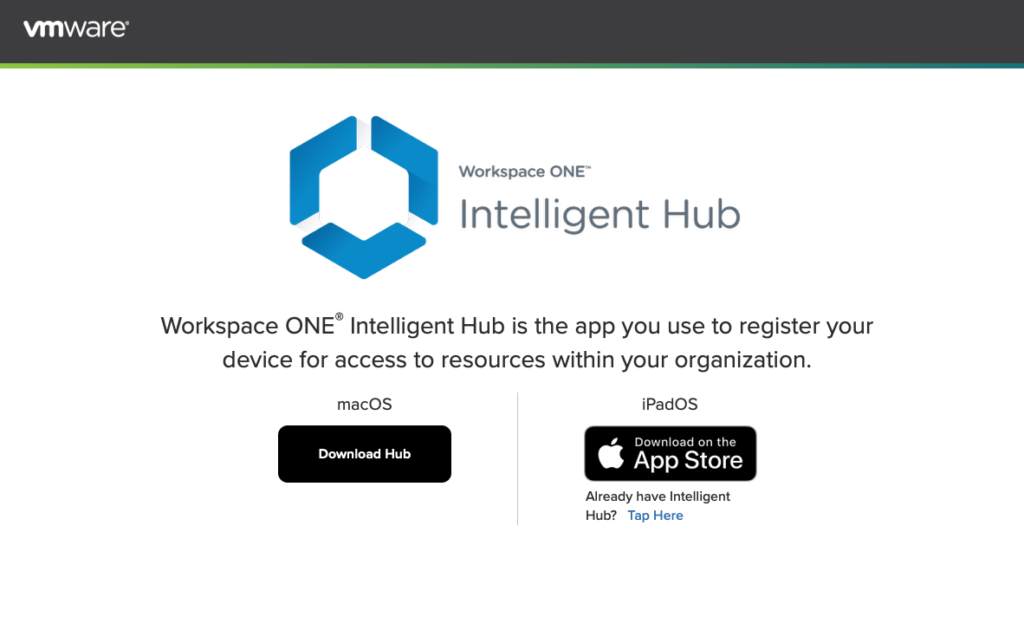 After downloading, you simply install the package. During the installation, you have to sign in to the Workspace ONE Access portal to authenticate and Device Management will be enabled. 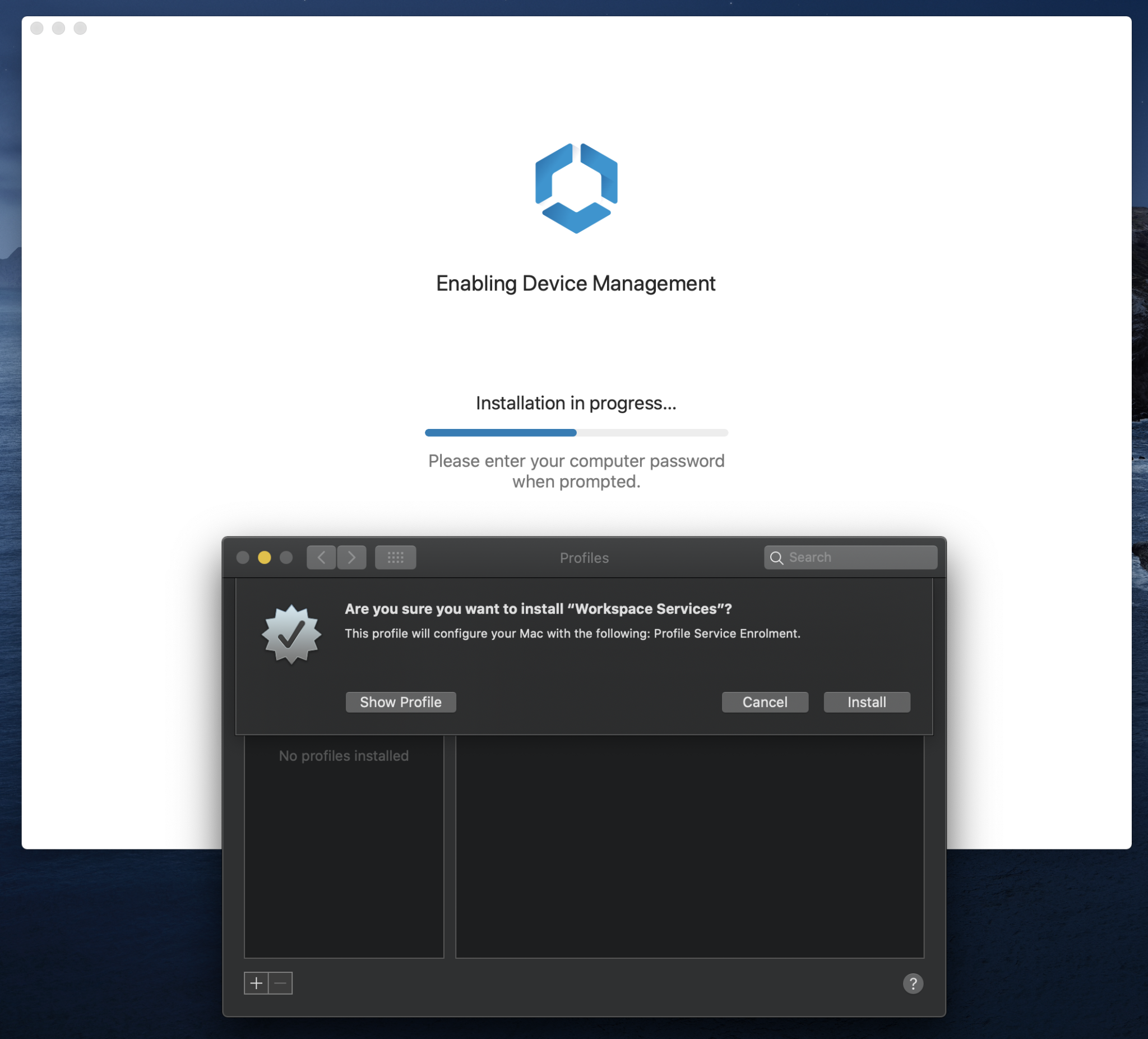 Enrollment itself takes just a couple of minutes. When it’s finished you get the following screen: 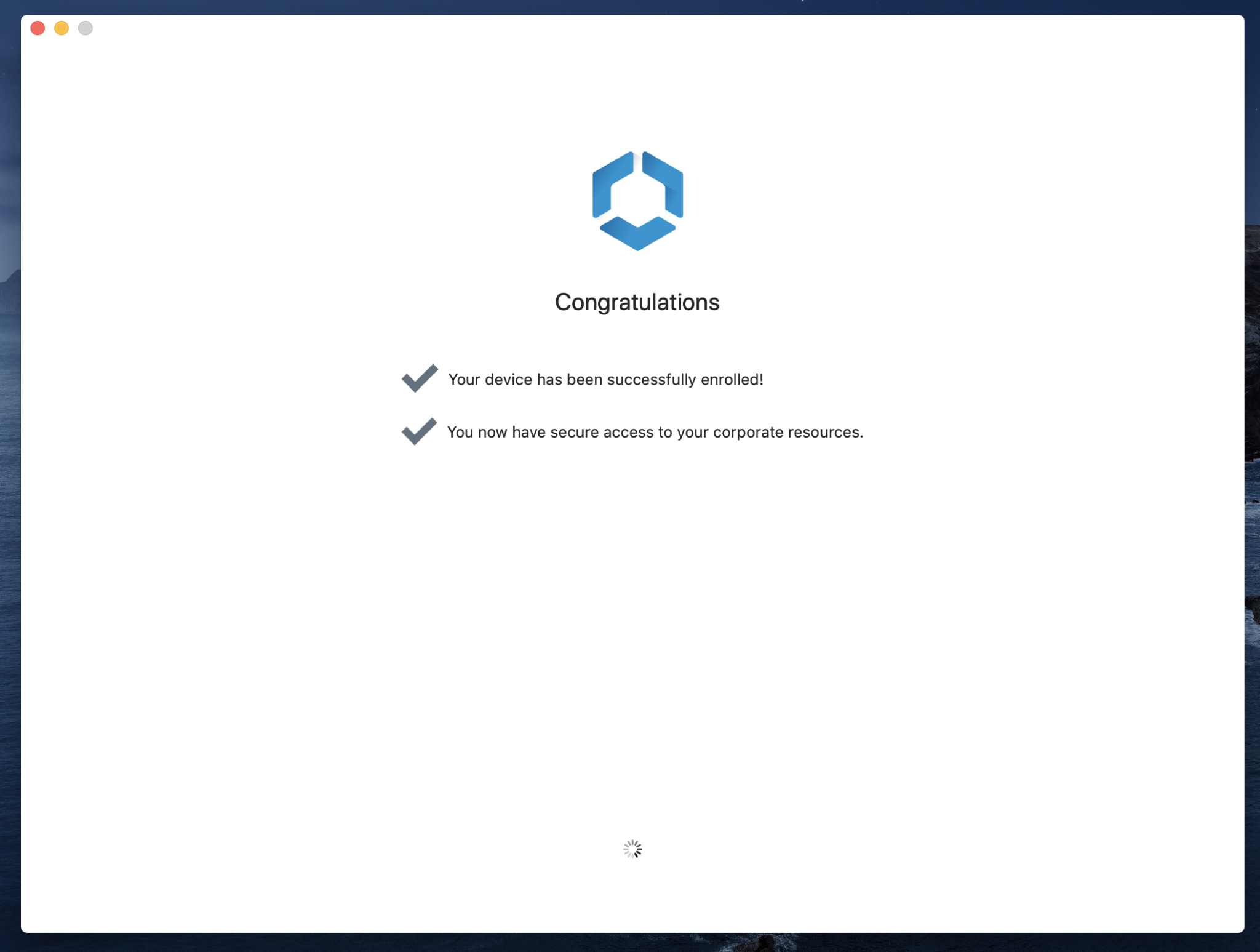 The next step is to simply check in the Workspace ONE UEM portal if the device is ready to access the company resources which you are entitled to: 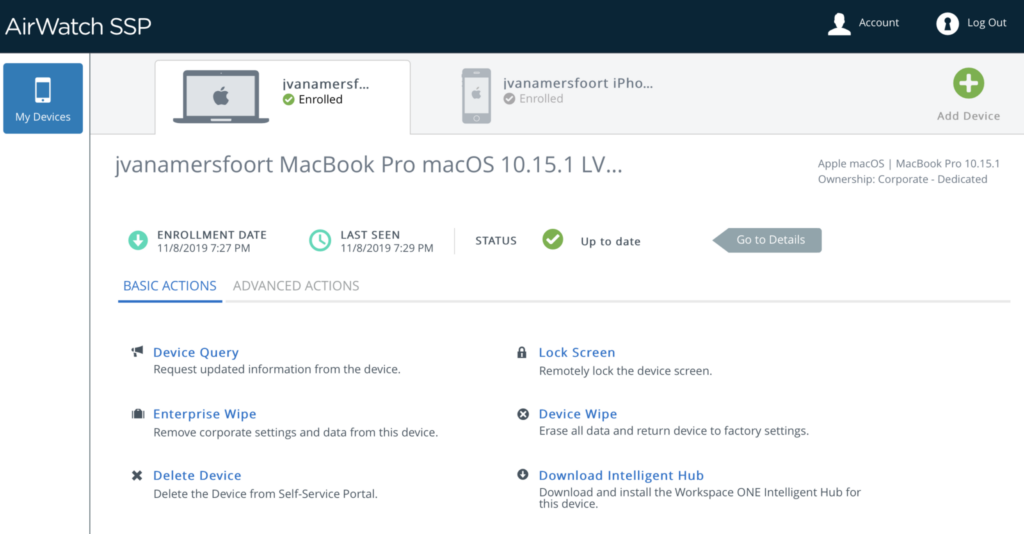 As you can see, I am fully able to access the company resources and continue working again. And that just within 25 minutes from unboxing the device. 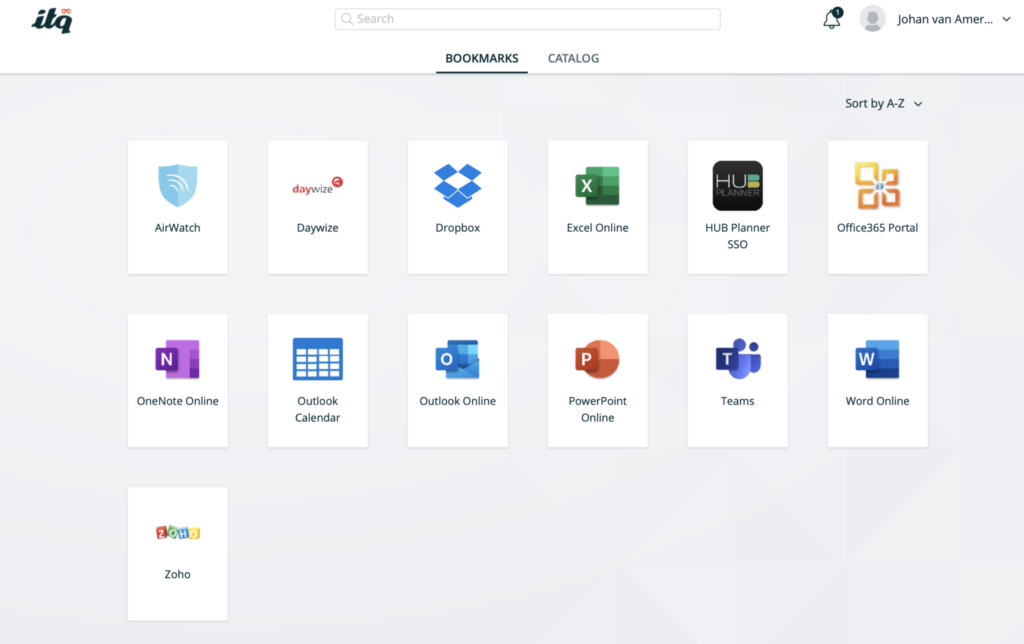 I think this really shows the power of VMware Workspace ONE in terms of Employee Experience. I didn’t have to wait until IT had purchased a new device and provision it for me. It didn’t take 3 days for me to continue my work again. And it most certainly made me eat my own dog food. I always believed in the power of Workspace ONE, but I was now able to experience it myself which made me realize that every employee of any organization should have it.

I started the story with the learning experience. What I learned is that I will never ever take my gear to the streets of Barcelona again (or any other city for that matter) during the night. I also learned (again) that having a proper backup of your files is essential. I was lucky enough to have most of my personal and ITQ documents in Dropbox so I was able to continue my work. I also lost some data, but that wasn’t customer data.

Another thing I learned is how awesome the vCommunity is. During the last day of VMworld, I didn’t have anything to charge my phone again. So, after I posted a tweet about the theft, I got a lot of power banks, cables and other things offered for which I am really grateful. Also, both Rubrik and Cohesity shipped me a new bag full of swag which also shows how they value vExperts.

ITQ has been working with VMware Workspace ONE for a while and we only consume SaaS- and Web-based applications with native SAML-support. This makes it fairly simple to fully integrate everything into Workspace ONE Access and UEM. But, even if your organization has traditional applications (such as Adobe Reader, AutoCAD, development suites, etc) it is still possible to have a similar experience. If you would like to know how VMware Workspace ONE can help your organization, please don’t hesitate and contact us here. We can help you get a similar Employee Experience!